Empirical Labs Plugins - The Soul of our Hardware in the Box

Once plugins began to be a mainstay in studios all over the world, it became increasingly important to us to offer the features and sounds of our world-class, analog hardware products “in the box” for audio engineers with even the most minimal DAW system. Dave Derr (the founder of Empirical Labs and creator of the Distressor) was first introduced to this idea when he was approached by Universal Audio to make an emulation of the FATSO for the UAD platform back in 2008. After witnessing the capabilities of the developers at Universal Audio, Dave became keenly aware of how great their emulations sounded and became open to doing another plugin with them, and the idea of making his own.

Not long after the release of the Fatso emulation by Universal Audio in 2009, Dave was flooded with requests to make a Distressor plugin. Although Dave was thrilled by how great the Fatso emulation sounded, he wanted to make his own native Distressor-style plugin with expanded features, rather than a direct 1:1 emulation of the Distressor. After months of planning and stringent development, Dave Derr’s own compressor plugin, the Arousor, was released in 2016. At this point, Dave was certain that he wanted premiere audio brands like Universal Audio to create precise digital emulations of his products, so he can focus on making his own plugins that include features and capabilities that could not be replicated in the hardware domain. With that decision in mind, Dave began collaborating on the development of the EL8 Distressor emulation with Universal Audio that same year.

A few years later, Dave brought the soul of Empirical Labs hardware in the box once again with the BIG FrEQ in 2020; expanding on the idea of its hardware counterpart, the Lil FrEQ, which was getting its own emulation at the same time. After seeing the response to both his own plugins and the emulations by Universal Audio, Dave was thrilled to collaborate on emulations of his last 2 major hardware products with the emulation experts at Softube, who have been close friends with Dave for years beforehand. Dave was especially elated to work with Softube because he knows that they make the best completely native direct emulations of hardware units. After working with them closely for about a year, Softube released the Empirical Labs Complete Collection in February 2021 which included precise digital emulations of the Mike-E channel strip and the Lil FrEQ parametric EQ, as well as a unique virtual Empirical Labs Trak Pak mixing console that featured the sounds and features of both plugins designed for their Console 1 mixing system.

Although all of our full size hardware products now have emulations made by some of the best developers in the industry, the story of Empirical Labs homegrown plugins continues to today, where Dave and the esteemed developers at Empirical Labs continue to work on new plugins that defy the limitations of hardware. Learn more about all of Dave’s plugin endeavors and their development below and see which one will be the next addition to your plugin collection.

Embellishing our Hardware in Software

When Dave set out to make his own line of plugins, he made it a point to expand on the features of our hardware products, rather than making direct emulations. The most attractive quality of software to Dave was that it allowed him to add features and parameters without limits, whereas he was limited to only a certain amount of space of a circuit board and front panel when developing hardware. This also gave him the opportunity to add more features and tweaks later down the line without much interruption to the user experience. With this in mind, Dave has always been open to suggestions from our users and has been very active with the community of Empirical Labs plugin users on Gearspace, and has included many features suggested by the community to our products for free to all current users of our plugins. You can also suggest features and join the conversation with Dave on our Arousor Thread and BIG FrEQ Thread on Gearspace. We may only have 2 plugins right now, but we promise that there are more to come! 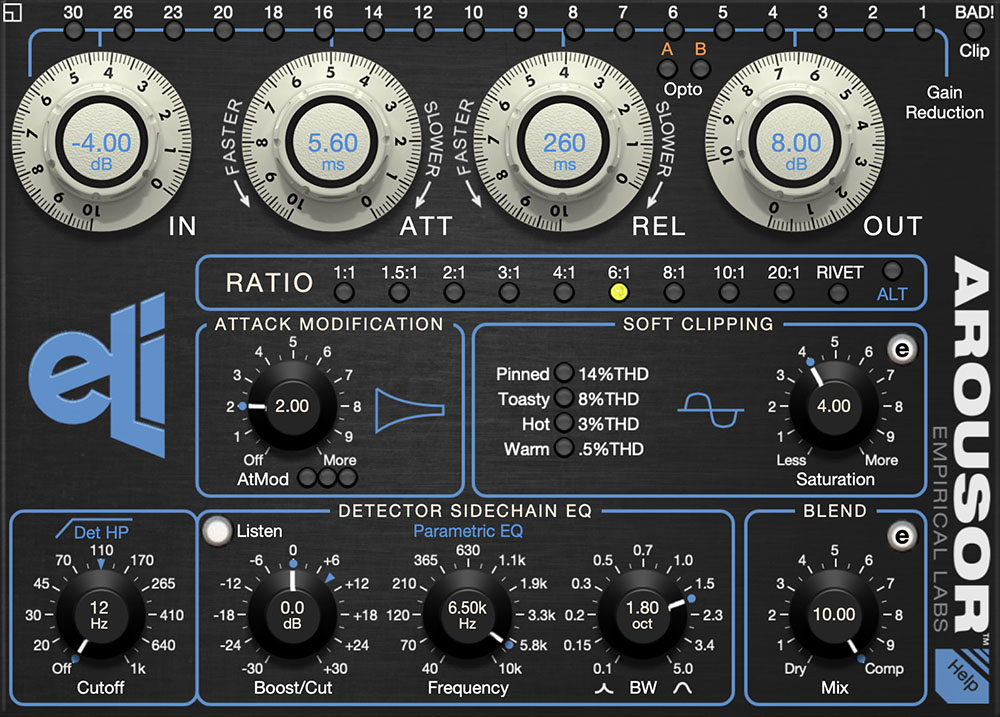 The Arousor is our flagship compressor plugin based on our world-famous EL8 Distressor. As stated above, this plugin is not a direct emulation of the Distressor. Instead, it is an expansion on the sound and functionality of the Distressor. Since the capabilities of software are so much more scalable than hardware, features that are typically a preset value on our hardware are expanded to practically infinitely variable knobs. A prime example of this is the expanded functionality of the Detector Sidechain EQ section of the Arousor, whereas on the Distressor there are only 2 detector settings (High Pass and Band Pass). The Arousor has quickly become a go-to compressor plugin for engineers everywhere and is the best solution for adding Distressor-style tone and compression to your DAW.

The BIG FrEQ is an equalizer plugin inspired by our Lil FrEQ hardware EQ that merges the musical tones and feel of analog equalizers with the modern functionalities and capabilities of plugin equalizers. One of the most unique features of the BIG FrEQ is that it offers the ability to create “flat-top” EQ curves with an analog approach. Unlike most typical parametric EQ sections, each of the six parametric bands offers an additional slope control that allows for flattening out the EQ shape and grabbing more frequencies equally for more musical EQ curve shapes. The analog tone shaping aspect is emphasized with the ability to dial in more harmonic saturation with the FINISHER knob. Once again, the BIG FrEQ is not an emulation of our hardware, rather it is another example of how we bring the quality of our hardware to our software products and continue to offer the things that can not be done in the hardware realm into the box. 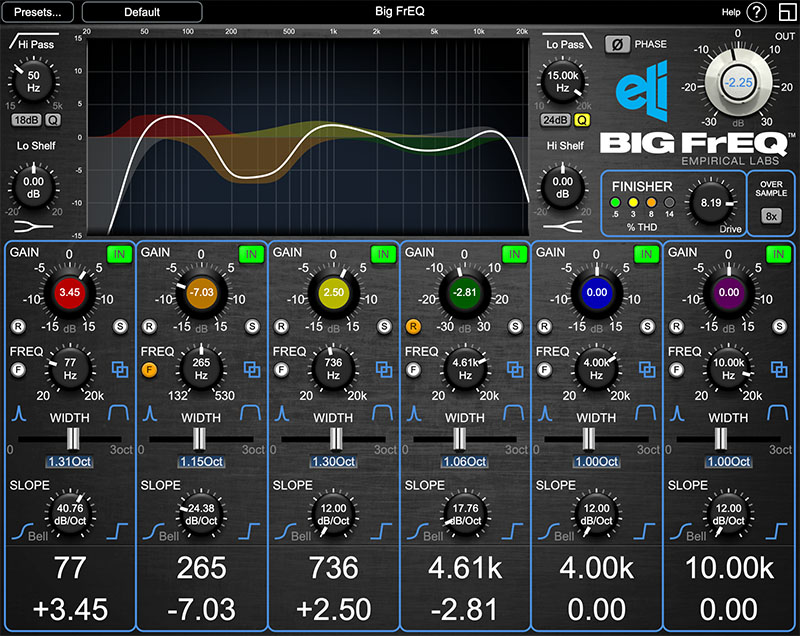 Our First Glimpse at the World of Plug-ins

Back in 2008, Universal Audio introduced Dave to the idea of collaborating on a direct emulation of Empirical Labs hardware in a plugin. Since the Distressor was the bread and butter of Empirical Labs, he wanted to introduce the FATSO in the plugin world first to test the waters. He was a bit apprehensive about it at first, but he was open to the idea of expanding on threshold controller functionality of the FATSO and was eager to introduce the sound Empirical Labs products to a wider audience. He was also keen on the idea of being totally involved in the design and development of the plugin, so he can be sure it is just as good as the hardware unit. After a few months of development, the FATSO Jr. / Sr. plugin was released in 2009 on the UAD platform.

The FATSO Jr. / Sr. is a direct emulation of the original EL7 FATSO developed for the UAD platform. This is the only emulation of the FATSO available in the plugin market. Unlike the hardware unit, this plugin features an expanded compressor control section called “Dave Derr’s Custom Mods.”

The Empirical Labs EL8 Distressor is a direct emulation of the original EL8 Distressor for the UAD platform. This is one of the only Distressor emulations that sounds almost exactly the same as the hardware unit in A/B tests. By popular request, this plugin also features mix knob for balancing the compressed and uncompressed signal.

Dave has been good friends with the developers at Softube, since they approached him about making a Distressor emulation years ago. In fact, they shared a karaoke night filled with beer and cheers at NAMM every year for the past 15 years. Of course, he denied their offer for a while until a new opportunity to finally have emulations of our last 2 hardware products emerged from the release of their new peripheral mixing controller, Console 1. This system was the perfect place to implement the TrakPak (Mike-E + LilFrEQ) in a digital audio workstation and create a virtual Empirical Labs console. While everyone was locked inside during the 2020 pandemic, Dave was working with Softube virtually; sharing drawings and testing out beta versions every week until the Empirical Labs Complete Collection was released in early 2021. Now, after many years of plugin development, anyone can have all 4 major hardware products in their DAW.

The Mike-E plugin by Softube is a direct emulation of the EL9 Mike-E channel strip by Empirical Labs. Although it may seem odd to emulate a preamp, this plugin offers the clean and punchy tones of its hardware counterpart followed by a compressor section inspired by the circuitry of the Distressor and the FATSO. It also has slightly expanded emphasis modes and can be used with Console 1.

The Lil FrEQ plugin by Softube is a direct emulation of the ELQ Lil FrEQ by Empirical Labs. Like it’s hardware counterpart, it offers a classic EQ sound with modern control along with a powerful de-esser that was later introduced as the DerrEsser 500-series module. Like the Mike-E plugin, it can be used with Console 1 systems. 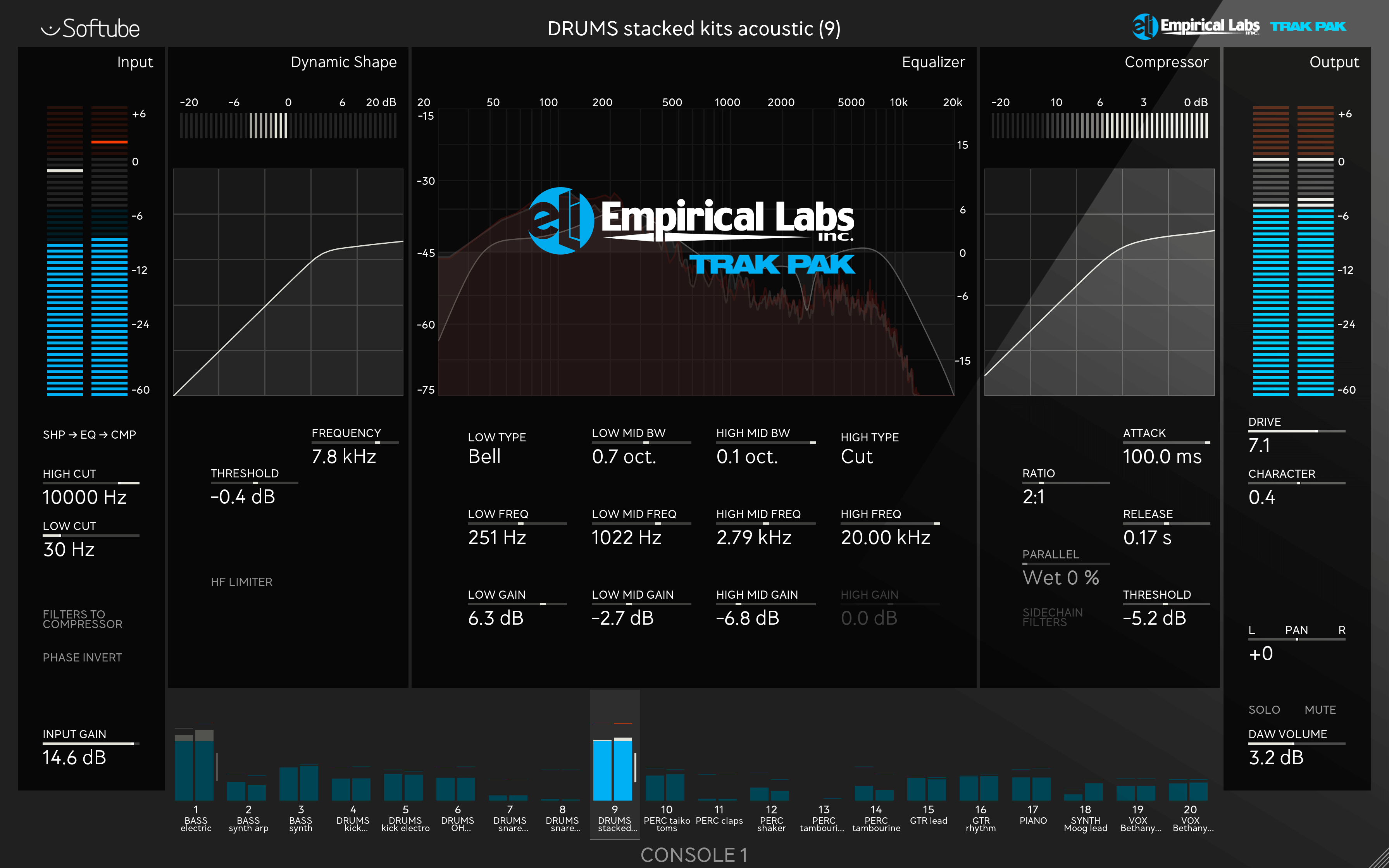 The TrakPak for Console 1 by Softube employs the features and sound of both the Mike-E and Lil FrEQ plugins into the workflow of the Console 1 mixing system to create a virtual Empirical Labs console in your DAW complete with a hardware controller. 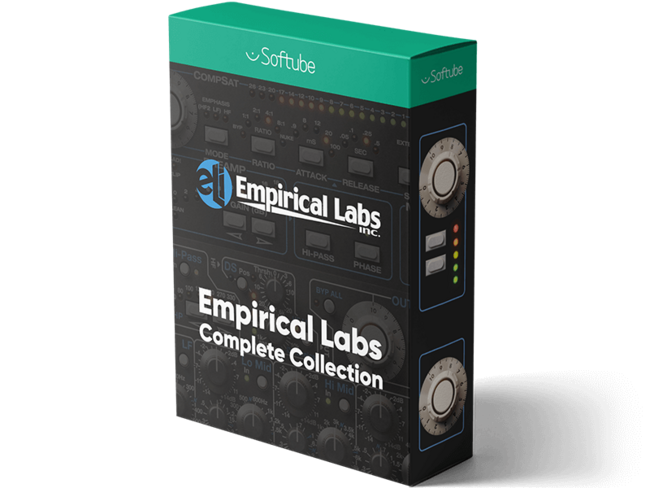