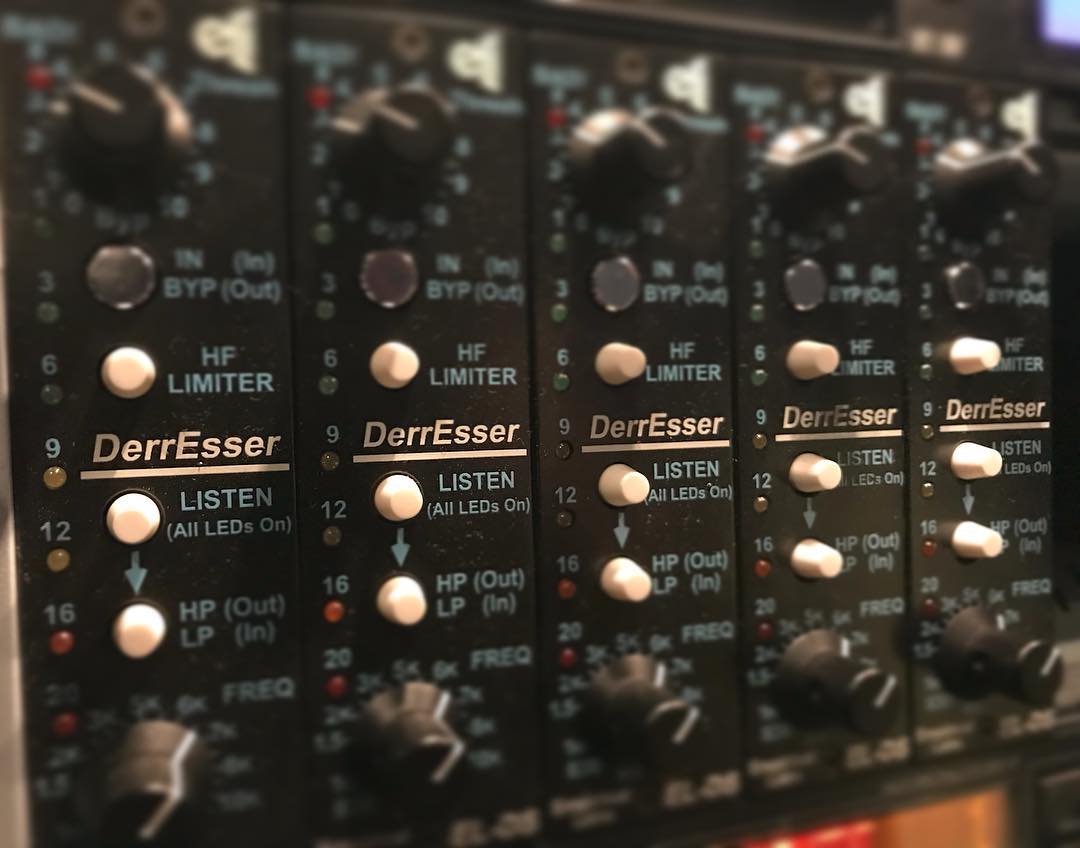 Empirical Labs uses an unusual De-Esser and HF (high frequency) limiter circuit in two of their products, the Lil FrEQ and the DerrEsser.  Folks often ask why the circuit is so invisible and easy to use, having only one threshold control and one corner frequency control.  It involves being “invisible” when not acting, and when it does act, it must act super quickly and smoothly.

There are four key parts to the circuits

3)       The Detector – This determines how much and how fast the VCA turns up and down the problem frequencies.

4)       The Summer, a two input mixer, which adds the frequencies back together seamlessly.

One of the keys to “invisible operation” is a special crossover filter, dividing the audio band into Low frequencies and high frequencies band.  In order to be colorless when not in operation, the two bands must sum back together perfectly, with no phase or frequency response effects.  Fortunately, we found a minimal path circuit which can guarantee virtually perfect phase and frequency response when the circuit is not acting on a signal. We use a smooth two pole filter complimentary circuit to accomplish this, providing a 12dB per octave crossover slope on the low frequencies.

The high frequency band is then put through a VCA (voltage controlled amplifier), which is what turns the highs up and down, depending on what the detector circuitry sees, and how it is set.  One of the advantages of processing only the high frequencies is that the time constants of the gain reduction can be extremely fast, without causing mid or low frequency distortion.  This is another key to its invisible” operation.  If the high frequencies are turned down (compressed) too slowly, noticeable bursts and sibilance will get through.  And if they’re turned back up to normal level too slowly, you will hear the dropout of the high frequencies. So because it was possible to make things really fast, yet avoid severe modulation distortion, we made it act in microseconds.

We also trim out any imperfections of the gain and phase between the LF band and the HF band, guaranteeing invisibility when not acting.  Square waves are perfect when the DerrEsser is below threshold.

Another factor is layout of the PCB.  High frequencies tend to get coupled into nearby traces and components.  With gain control devices, you have to figure out how to get rid of the crosstalk you do NOT like.  Many older compressors have a lot of gain control modulation and DC feedthrough.  It is my belief that sometimes these add a nice character or musicality to the sound.  Direct modulation of a VCA control port by the audio signal usually leads to creation of 2nd harmonic (and other even harmonics).  The 2nd harmonic of highly valued vintage gear, especially class A stuff, is a very measurable artifact, and probably a subtle audible one also.  We spent time trying to figure out if feedthrough is working for the sound, or against it, and adjust the PCB layout to get the desired result.  In the case of the DerrEsser, we went for minimum control feedthrough and crosstalk, to achieve the lowest distortion and most uncolored sound.  It required a four-layer board, and several revisions to arrive at our current design.

HF LIMITER & VINYL – Much of the sound folks like about Vinyl recordings like 33RPM LPs, and 45RPM Singles is the creamy high frequencies.  When the vinyl sounds really good compared to the CD, many times it is not so much the medium, but what the Mastering and Disc Cutting people did.  I had seen a disc-cutting engineer use a Neumann BSB 74 Acceleration Limiter that did something wonderful to the high frequencies.  It too worked by dividing the audio up into two bands and limiting the high frequency one.  The crossover point was around 4KHz.  Although I couldn’t bring one home to do exhaustive tests on, I did roughly plot the HF compression curve at a mastering house by hand, many years ago.  It had a small knee before a hard limiting occurred at 10KHz.  It reacted in microseconds.  This Neumann device goes for 10’s of thousands of dollars these days.

Although our HF LIMITER in the DerrEsser and Lil FrEQ is not an emulation of the old Neumann BSB 74, it offers a very similar effect, with a lot more control over the crossover frequency, being variable from 830Hz to almost 12KHz. The knee is important for avoiding threshold modulation, and gives the HF Limiter an advantage over the De-Esser mode for general HF softening and warming, especially when acting more frequently.  It has an absolute threshold control, that just looks at how much High Frequency energy there is, and doesn’t care what the lower frequencies are doing.  When you set the threshold, you are saying I don’t want the high frequencies to get any louder than this.